‘Well-proportioned, well-balanced’ are just a few words that describe symmetry. For my thesis I’m researching how we measure our position in this world through art. I see art as a visual langue and therefore it can be found all around us. But foremost I’m interested in how symmetric and asymmetric can influence us while we may be unaware of it. This world has so many things to offer that we easy can be confused. We create a certain order so we don’t get lost in the chaos. We have done this for ages. I believe we were ordering our lives even before we had a spoken langue. It might even be introduced into this world before the first humans existed. A natural preference. There are scientists who claim that programming a symmetric form for life uses less code than a form of life that is asymmetric. 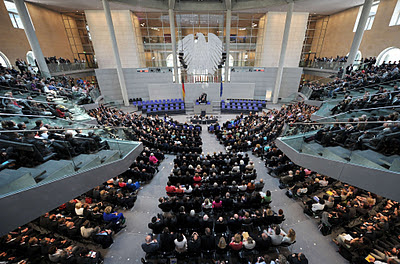 Back to the now...for last week I saw this image on the news of German Chancellor Angela Merkel who addressed the Bundestag on the European Union plans to save the euro. Since I’ve lost interest in the news for a while I only encounter it at the gym when I work out. So while I’m working on my condition my eyes get a change to wonder over the screens in front of me. Sometimes there is sound and it’s even better when the sound is off. This enables me to use the visual information only. Without the chitchat of reporters I have the idea that I get a better understanding of what it is really going on. My ‘thesis research state’ is one that works continues. And seeing this great room where (so called) important things are being discussed left me in awe by the force of the symmetric dominance. Is that a spread winged eagle in the back? Are we living in 2011? I understand that symmetry and beauty are often linked, particularly by mathematicians and scientists but in this case I felt they were worlds apart. Here symmetry is used to be an obvious feature of good, practical and effective design. The only problem is that I don’t believe it. It’s like they went through enormous effort to make sure everybody gets the importance of this space. But I believe it’s a false message. I think this once was believable in the mid 1990’s but not anymore. Therefore the message that comes from this place in our current time will not be believable. I would like to quote from an article by the art historian Dagobert Frey about the tension between symmetry and asymmetry:
Symmetry signifies rest and binding, asymmetry motion and loosening, the one order and law, the other arbitrariness and accident, the one formal rigidity and constraint, the other life, play and freedom. 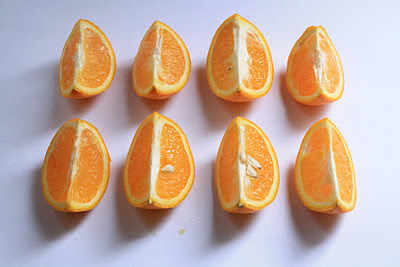 Even the division of two oranges can look symmetric but as individual pieces there are many differences. To explore this relation even further I will travel to Vaals in the south of Holland next week. Where Dutch Benedictine monk and architect Don Hans van der Waal aimed to come closer to nature, by seeking a formal language of building which has the same scale one finds in natural growth. Numbers are the key to his work and he made his own number sequences in order to achieve a wider range of combinations and possibilities.